Spend a great day in the home of the Olympic Games! One-day excursions (with busses) to the archaeological sites of Olympia with English speaking or German speaking guide.

Olympia is also known for the gigantic ivory and gold statue of Zeus that used to stand there, sculpted by Pheidias, which was named one of the Seven Wonders of the Ancient World by Antipater of Sidon. Very close to the Temple of Zeus which housed this statue, the studio of Pheidias was excavated in the 1950s. Evidence found there, such as sculptor’s tools, corroborates this opinion. The ancient ruins sit north of the Alfeios River and Mount Kronos (named after the Greek deity Kronos). The Kladeos, a tributary of the Alfeios, flows around the area. Its located in the part of Greece which is called Peloponesse. In Ancient Greece, Olympia was sacred ground to the Greeks. 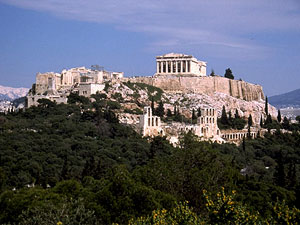 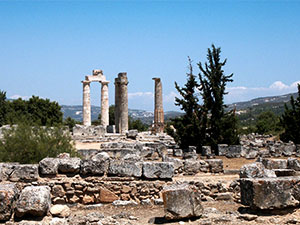